‘Tenderness’, to the astonishment of High Court judges and some others, was D.H. Lawrence’s working title for what became ‘Lady Chatterley’s Lover’. Lawrence perceived a ‘taboo on tenderness’ in his time, and it’s apparent that the West has nowhere near cracked that taboo even today, eight patchily ‘liberated’ decades later. Enter Roy Stuart with Glimpse 3, the third in his richly packed series of probingly erotic videos. Whilst every sizeable episode in no’s 1 and 2 has, for the alert, its quotient or infusion of tenderness, only a minority of Stuart’s viewers/voyeurs may spot it amid the intense provocation – of mind as much as groin — of the so-much that can be found going on in them.nnThe first six minutes of Glimpse 3 give flashing hints of the kind of whirling whole we’ve already had to thank Roy Stuart for, albeit there happen to be no male-female conjunctions shown (fear not, we shall encounter them aplenty, since there’s some 140 minutes on this disc). But the accomplished Anna Bielska, who can look any age from 13 to 23, is there dancing, now clothed now naked, in parks and alleys of Rome. Then a sternly entrancing brunette, legs wide-spread on a gilt chair, holds knickers (whose?) aloft; soon she will be near-naked on the carpet, beginning a magical self-caressing journey. As will a sister in pleasure-exploration, a blonde, still in her black jersey-top, this time with the aid of a formidably elongated vibrator. Which will help her achieve, mid-orgasm, an unmistakably satisfying release of urine. Those of us who respond with amiable but not particularly stirred interest, mild curiosity, to such golden-shower water-sports – they’re among Stuart’s specialities – should not on that account miss, nor minimize, the little human triumphs, the evident joyousness, brought by release from some old inhibition.

But Roy Stuart’s interest, missionary in intensity, is always centred in the celebration and release of woman’s desire and her deep wellsprings of potential pleasure, which we witness her being encouraged to tap sometimes via ingenuities of polymorph-perversity, othertimes with startlingly direct urgency and need. As complementary, he rightly perceives men’s uniquely satisfying role as (occasional) ministers to that pleasure.

As before, some sequences are sound-tracked, some not: we might long always to hear those delectably varied gasps, sighs, and rare exclamations, but withholding them on occasion helps retain the edginess of the whole. And Roy Stuart’s music grows on one, now underscoring justified excitement, now yielding piquant contrast as, say, gavotte accompanies raunch. To close GL3’s start, after more plump crotches, sunlit sea, placid river, the next two minutes, falling leisurely, take us back to the Eternal City. In which a barefoot short-skirted brunette simply buys water from a stall, sits on high sunlit steps, critically examines her feet, showing to advantage good legs and nicely-swelled panties… (By the way, all Glimpse women are, cosmetics sometimes apart, celebratedly natural) However, none of this lead-in prepares us, unless by artful contrast, for the miniature masterpiece that comes next. It deserves its own title-page, but instead we are suddenly embarked

on the most sustained single episode in the series so far. This is a surely unmistakable essay in tenderness at its most taboo: a lyrically earthy showing of how the sensual education of a pair of blossoming school-girls might be furthered, at a self-revealed moment of maturation – they’re comparing breasts, looking up the encyclopaedia — via the helping hands (yes, literally) of a briefly stern yet complicitly understanding matron. That should, alas, in the world we call real, sound transgressive, subversive — and, girl oh girl, it is both! The lesson we see being delivered belongs in Stuart’s curriculum for, shall we say, Utopia High.

These 25 absorbing minutes are so integrated that they feel almost like a single ‘take’. As well as in the camerawork, there’s nice judgement shown both in the almost total absence of music – just a few delicate chords once or twice – and in Stuart’s unusual holding off, until the episode’s closing moments, from reminding us of the surrounding studio setting.

Anna Bielska is partnered here by Tommi, the engaging tomboy-girl waif already encountered by readers in ‘The Big Surprise’, in Roy’s Volume II. Both, protean, can shed years, draw themselves back into the days of giggling awkwardness which the start of this scene demands; both can, and do, gain years during it, via that recognizable gravity of first-enacted desire. Their profiles, just before the close, are glimpsed almost Madonna-like: not accidentally, one surmises. The ‘matron’ has become their angelic accomplice. 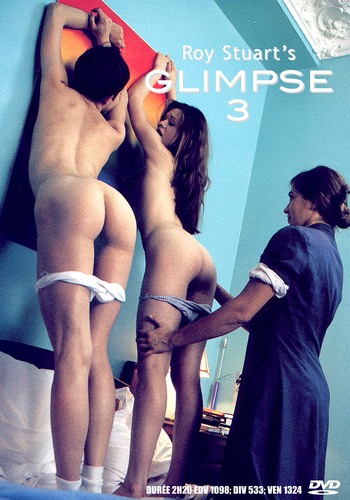 Buy Glimpse 3 from Roy Stuart at