Every Roy Stuart Glimpse is centred (of course) on female pleasure, and Glimpse 5 is of similar generous length to its companions, at ca 140 minutes. Yet it’s distinctively different from all the others. For one thing, we’re offered, instead of the usual 15-minute ‘chapter’ jumps, no fewer than fourteen neatly-indexed scenes – each with its own inviting 30-second thumbnail preview – varying in length between five and eighteen minutes. The hint should be taken: these are scenes to be savoured, not rushed. Viewing just one or two at a sitting, you’ll best appreciate the offbeat artistry of each. More than half feature a single ecstasy-seeker (-finder indeed, most times), or two or three separate workers with fingers and/or vibrators, but other scenes are mini-compilations in their own right.

There’s less overt story-telling than usual, so some of us will be forced to extrapolate stories of our own. We have here, probably, a few girls with modelling experience (some more than others), an au-pair or four from across Europe/USA, at least one Stuart ‘natural’ – let’s call her Jessie (short for Jezebel?) — whom we already know from devastating scenes in Glimpse 2, though it’s my guess that the two scenes she’s accorded here (7 & 13) are earlier. All of these are there to caress themselves, often being introduced first-time to vibrators, in Stuart’s uniquely private/public settings; each breaks her taboos happily, often with a winning smile somewhere during her magic voyage, sometimes with true grace. Specially close to my heart are two or three slightly more mature women – Parisiennes all, I’d like to think – already so well settled into their sensuality that each evidences impatience to get on with it: ‘tres vite’, one mutters. Perhaps they have kids at home, or are already savouring their next haggle with some merchant dans les passages – meanwhile a glorious, an all-over self-caressing, a thoroughly knee-trembling orgasm can be allowed to become part of the day’s pleasure: bien sûr, pourquoi pas? Whether it was part of the contract or not, my special favourite’s left hand could not be denied a firm male cock to grasp – how one loves that trait in a woman! 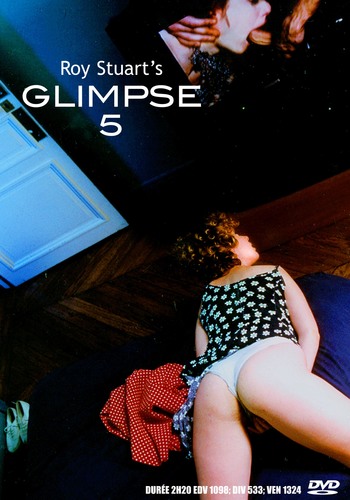 Buy Glimpse 5 from Roy Stuart at