A brunette in panties masturbates a man hidden behind a car. A sequence follows where two women and one man, their faces outside the frame, caress each other’s sex. Next unfolds a sequence of poses where the model wearing a blouse, buttoned half open, socks and a tight skirt, scratches herself and yawns langourously. A kind of mandog sniffs the panties of his mistress. A tattooed biker type literally fucks the mouth of a bourgeoise. The artist Madeleine Berkheimer abandons herself to a Saphic part of herself under the eye of Milly, Molly and Mandy.

The sequences unfold in a seemingly random and a spontaneous manner in which one sucks, licks and gives full mouthed kisses. The preliminaries are stretched and the dildoes are handed over. Moving from the unusual to the cliché (from the backyard, SM soft, and the moulded ceilings….) Glimpse 8 flows in a stream of images like a surge of piss, between the spread out thighs of young girls. Sometimes a fragment of a story is thrown in randomly with the music, at times wayward, where it’s not only a question of sex, but also of starving in Paris and showers in lofts. One must wait about half an hour

Glimpse 8 does not fit into the imposed norms of common pornography, but seems to trace a figured line between immediate satisfaction and the construction of desire in the image. As the scenes unfold, figuratively, in the accumulation of a kind of monomania of pleasure, fiction takes its shape. One imagines pieces of nostalgia unpacked at the foot of a wall, memories crystallised in urgency, an open, flowing tap and a life devoted to the erotic. Close to the end, there are some troubling moments, some intimate dance numbers, complicit smiles and the recollection of all these girls who played the game. 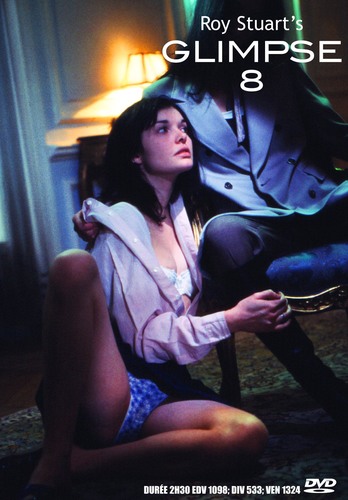 Buy Glimpse 8 from Roy Stuart at